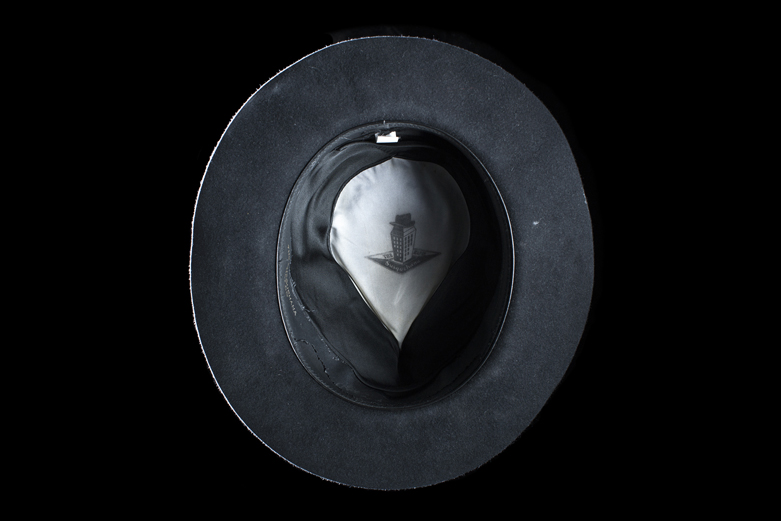 For the past seven years, I have always worn a hat. Not a cap or bunnet or bobble hat. A proper, brimmed Fedora. The first time you wear such a hat you can feel quite conspicuous but now it feels, to me, like second nature. It’s become part of my self-image. I think of myself as a hatted man.The idea of shooting hats though, came about almost by accident. I photographed my Fedora on a whim to use as a visual signature on correspondence. Even without my scrawl at the bottom, the men from O Street—who have also been known to wear a hat or two in their time—would know it was from me.

Most hats are designed for wearing outside and the exterior has to be durable enough to survive wind, rain, or if you’re a soldier, even more rough-and-tumble conditions. It gets battered and bumped, and is always visible to the outside world. But the interior is a far more intimate space. It’s soft folds of silk, cushioning and protective. Working, walking, whatever you’re doing… you’ll leave an imprint on the headband, a sweaty shadow of your toil. That’s the part that fascinates me. Wear a hat every day and you wear a little bit of it away.

The director of Summerhall has a collection of hats on the wall, and i’m currently shooting those. Even with no idea who they belong to, you still get some sense of the identity of the person, of their history. I also like the fact that the hole in the hat—that “o”—represents your head. the logical next step would be to photograph the positives to that negative, presumably a series of bald heads.

·
Peter Dibdin is one of O Street’s favourite photographers.
He is based in the Summerhall, Edinburgh’s new cultural hub.
you can see more of his work at peterdibdin.com

This article was crafted by Glasgow-based journalist and copywriter Graeme Virtue.